I read the first chapter of The Muse at the start of August as part of a Try a Chapter post and while that definitely left me feeling like I should read it soon, it was reading The Lady and The Highwayman that put me in the mood for more historical fiction made me carry on so quickly. For me, historical fiction typically makes me want to curl up with a blanket on the sofa with a least one candle burning away nearby so I had planned on saving this one for another month or so but with Jessie Burton’s new novel The Confession due for release next month I wanted to get to this one first. 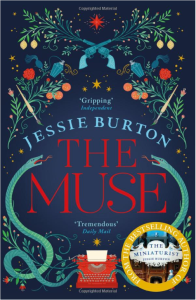 We follow two storylines throughout; Odelle living in London in the 1960s having recently moved from Trinidad. Odelle has just been offered a new job as a typist in an art gallery writes in her spare time but has never really shared her work with anyone; similarly 30 years earlier, in Spain in the run up to the second world war Olive Schloss paints but keeps her art and her offer of a place at art school a secret to her family.  Early on each character meets new people who will change the course of their lives, for Odelle its Marjorie Quick, for Olive, her life changes tracks when she meets fellow artist and teacher Issac Robles.  When a painting is brought to Odelle’s gallery with the initials I.R. its met with a combination of excitement and suspicion; could this be a missing piece by a little known Spanish artist which never made it to its gallery destination and if it is how did it end up in a bedroom in Surrey?

The books alternates between the two timelines as we see the events and characters cleverly intertwine. It seems like a small detail but I loved the way the chapters were numbered, the 1960s chapters are labelled with integers and the 1930s with roman numerals which made them feel more like separate stories.  Sometimes with plots like this I find myself wanting to hear from one set of characters a lot more than the others and while I felt that every so slightly at the start that feeling wore off pretty quickly.

I’d call this primarily Historical Fiction but it has big elements of romance and mystery thrown in which really kept me hooked to the point of finishing the book about 45mins after I’d decided on reading ‘one more chapter’ and saving the rest for the next day.

I really enjoy Jessie Burton’s writing, the characters were largely completely believable; the descriptions were beautiful and the title is so fitting.  If you enjoyed the style of The Miniaturist then I think you’ll love this, The Muse was released at the end of 2016 so you can get your copy now (affiliate link).

1 thought on “The Muse ~ Jessie Burton”