Last year Fairlight books released a series of 5 novellas and that collection is about to double with the addition of five more short stories set in a variety of locations around the world. I was lucky enough to get access to three of the new releases early. 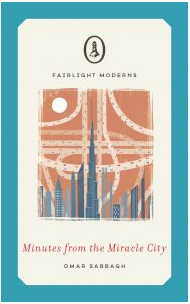 Set in Dubai, this novella follows a web of inter-tangled characters in the days leading up to Eid, the quick but seamless switches between character viewpoints mirrored the energy of the city. Ending on a frustrating but very well timed cliff hanger.  There were a lot of character names to follow and tie together, all of which cropped up a couple of times, none really taking centre stage which I imagine was the intention, making the city itself feel like the central figure, I really got the sense that it was the location bringing together all these different people from various backgrounds. From a selfish, curious perspective I really wish this had been longer as I really like this format of storytelling, e.g. one character might accidentally bump into someone in the street, they don’t know each other but one has a brother who owns a shop the other has just come from where he had an argument with the manager, its the format that can go really well (think Love Actually ) or go terribly wrong.  I really enjoyed this novella and I think it fits perfectly with the purpose of the Fairlight Modern series.

I’d never heard the term Nail House before starting this and naively thought this might have something to do with the house being covered in nails or something like that; it is however a Chinese term for a house which blocks development, go to google images for some fascinating images.  The Yi family own one of these houses, one by one their neighbours have given in and sold their properties and land to make way for a new block of apartments.  Lindon is an Australian project manager trying to use his recent post in China as an escape from this recent divorce. I feel like the plot was good but really needed to have been dragged out and the characters explored in more depth as there were some good plot twists that took me by surprise but it all felt a little bit rushed.  Fairlight Moderns are set around the globe and for this novella is shaped by culture rather than just geography; when we meet her Zhen Yi is preparing for her upcoming marriage and its the attitudes and expectations of her, her fiance and her family which really shape how the story progresses.

In the 1970s the small island of Bear Lake, near Canada revolved around the logging industry; during the prologue, we meet Tom.  Jump forward to part one and Tom is at school, well known for being good a maths and popular with girls; he catches a glimpse of Sasha, the extremely shy daughter of the mill foreman. He spends a summer trying to get Sasha to notice him, befriending her next door neighbour to give him a reason to be near her house.  The novella follows the journey of their relationship and Tom’s ambition to leave Bear Lake to study medicine alongside the journey of the town as the logging industry becomes less prominent. For a short book this covered quite a long time period so I didn’t feel like you could really get to inside the characters.

Overall these are all great additions to the series, Minutes from the Miracle City is definitely up there with Bottled Goods from last year for me.  You can view the complete collection on the Fairlight Books website.   Big thank you to Netgalley and the publishers for providing me with another sneak peek at this collection.

If you fancy picking up any of these books with free worldwide shipping take a look at my affliate link. You’ll pay the exact same price and I’ll recieve a small commision in return.